Out of Our Brokenness

Six days – eight roommates, and almost as many different rooms. You think the hotel staff was confused? At one point I had room cards for four different floors in my purse!

My white slacks are on their way back from Western Canada and a favorite necklace is returning from a brief visit to Pennsylvania.

The laughter and the prayers, the humility and the acceptance all were part of letting each of us newbies and mentees feel truly valued. The sisterhood of AWSA was amazing. But the most treasured thing we shared was what we all had in common – brokenness. 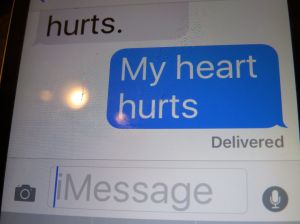 Some of us thought we were the only ones bringing pieces. Remnants of dreams, relationships, budgets, diets, hopes, longings. But prayers before conference began and the tables of materials for sharing among one another, revealed stories of every form of need – and of the One who united us all.

Instead of sermonettes or teachings there were testimonies of brokenness and deliverance. The theme that ran through all of our writing and speaking – the human need for wholeness found only in Christ.

Several of my new friends wrote for those like them who adopted children, some specifically called to love and adopt special needs children, another whose biological children were joined by 22 others, most old enough to be considered unadoptable. These women offer hope and compassion to others who adopt or have been adopted. Beautiful mosaics. 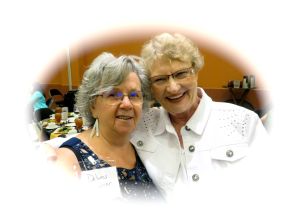 Other new friends told about the personal repercussion of huge changes in the publishing industry – one illustrating a 90% drop in income. Disease and financial stress were other common denominators, but there was not a single whiner.

We even had a joyologist!

Hope and respect and encouragement – leads, material, and follow-up contacts were freely offered. Those who experienced brokenness recognized, related, and respected others enduring similar turbulent waters. 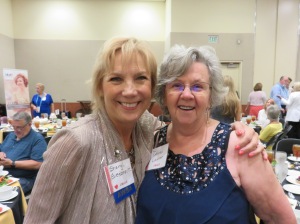 Tears of joy were also frequent as at one table where a guest unknown to an author across the eight-foot circle connected.

Let me tell you how what you wrote changed my life. 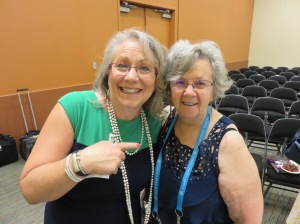 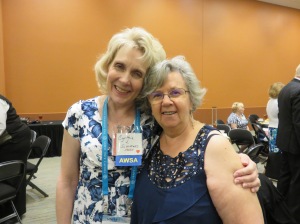 A number of these beautifully restored women spoke into my life spontaneously and generously, and others humbly rejoiced that God had also given me opportunity to share with them and others, through them.

There were no separations of status or fame.

We were all God’s girls. 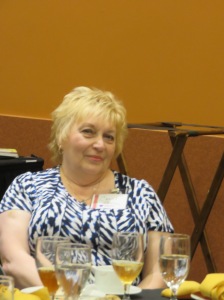 Some of these mothers had children and grandchildren  taken from them by death, and by life-choices and circumstances. They openly shared their shattered hearts and told how God brought hope into what they called their messes. Pain is messy.

I sometimes write of grieving after losing our child and was astonished several times by the sisterhood I felt. At the International Christian Retailer’s Show (over 1600 booths of publishers,distributors, marketers and producers of Christian products) a woman stopped me out of the crowds passing through.

She was signing a book for children and offered me a copy, then reached under her table to ask hesitatingly, if I might know of someone who would be interested to read this other book – on the loss of a child. Another time I was chatting generally with an editor about how readers want vulnerability about our brokenness so they know we understand theirs.

Agreeing, she turned and reque

sted a worker to remove a sample book from their display and gave it to me – the book, she said, that helped her – after losing a child.

Perhaps, she said, I might find something to pass on to others.

At the banquet, a woman I’d not yet met called out my name across the room and came over, asking to share our writing topics. She gasped when I explained, as she’d recently lost an ad

ult child and felt she should co-write about it. We will be communicating. Perhaps…

Then our main speaker had to cancel at the last minute due to an unexpected event. Mark Lowry would have loved to have been there as Torry Martin pinch-hit a hilarious illustration of how God can use an ADHD driven personality!

What a joy to laugh through 99% of the entire banquet talk.  I hope it’s ok I taped some of it for when I need a pick-me-up.

Well, he will never know.

I met Pat Boone and Ken Ham, was interviewed by HSBN TV, was encouraged to take up boxing, had one dinner with Babbie Mason and another paid for by a stranger who already had an impact in my life and my future.

My heart and my suitcase came home overflowing. 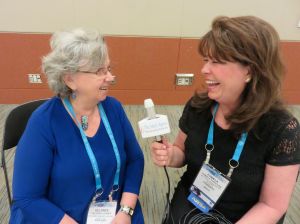 The enemy did not like it. Some had to leave early due to tragedies and emergencies. The pictured text above was real – it arrived during my time in Cincinnati.

Others faced heartbreaking news shortly after arriving home. Yet, as we continue to uphold one another, there is still hope. I have every confidence that out of these new storms, new seeds will also take root, and grow. Eventually, we pray the fruits that arise from our brokenness will be talked about and written about so that others can know we are real.

We understand. We write our truth that others will also find hope.

Out of our brokenness.

– I am so honored to be included in their member directory among many who already touched my life.

← Garbage Out!
How To Personally Apply Scripture →

2 Comments on “Out of Our Brokenness”