A Bucket List, A 100-Mile Rummage Sale and a Husband Dare

I don’t often get to spend time with my friend/daughter-in-law (DIL) Kris, so when she saw a bucket list item in the middle of a 100 mile rummage sale, I was happy to offer to be the designated driver and she the designated navigator.

When I informed my husband, however, he had another idea – a dare, really. He originally thought I said we were going to 100 rummage sales, and I suppose that was possible though even the thought was exhausting. We are, like most people our age, at the stage of downsizing, not hunting for gems at rummage sales. Consequently he challenged me to take 100 items and leave one at each rummage sale, so instead of bringing home 100 things, I’d be getting rid of them!

I accepted the challenge and prepared a box of items (though no where near 100 items). I also prayed that God would guide what I would leave where, and if it was his will that I could encourage or connect with at least one person through this special trip.

I’ve become, as daughters, friends and family have indicated, more and more controlling as the years go by – not that I like to control them, but that I like to be in control. I brought along a paper printout of each city stop on the route, with distances etc. Kris put it away in the car and pulled out her GPS! I had to learn trust real quickly. 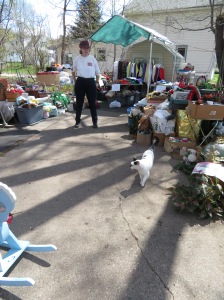 We had a great time discussing many things and especially books on the way up. At one point I was sharing the synopsis of a current read and thinking dear DIL might like to read it when I was done. She let me go on for quite a bit (apparently patiently used to my detailed descriptions) and then she said, “That sounds like Sarah’s Key,” which it was. It was fun each night to tell her where I was and to answer her queries about how I felt about different characters and happenings.

The first day was driving, finding the bucket-list-museum to be nice though a bit underwhelming pole barn. We then began the dare, visiting the sales that were still open at dusk in a near-by town. Kris caught me explaining the dare to one lady and challenged me to slip the goodies onto their tables instead, so I began alternating. The next day was almost total rummaging. I’d drive and we’d see a sign with balloons or ribbons and she’d say yes or no and we’d pull in.

At first we were tempted by signs that said huge, then quickly found the seller’s view did not match ours. Even the sign saying biggest, best sale at the high school deluded us. We envisioned the gym filled with tables upon tables of goodies. There were a few tables outside the school and books on blankets in the grass. We were soon laughing when we saw the word HUGE on a sign.

We did browse and contribute to the Feral Friends sale. (they capture, neuter and release Feral cats to reduce population. It was located by one of the numerous historical markers on the edge of a little park and a depot in process of restoration.

Flea markets were pretty big with raw honey, jam, moringa tea, and lots of unidentifiable things but had a few of what we were looking for (golden books, baby clothes for a new great-grandchild and steam punk items) but the barn sales were very dirty. I grew up near a farm and still did not expect things for sale to be coated with dust and grease and to be priced well over what we knew the value to be. Almost every place we left, we next wanted to go wash our hands.

There was an interesting bohemian couple that found Kris’ broad knowledge interesting, so while they continued to chat and try to convince her to buy more of their books, I slipped over to another sale near the car. I’d seen the woman manning the tables go into the house, so it was a perfect opportunity to slip a couple of surprises on her table. As

we were leaving, the woman came out of the house, and began straightening items on the tables. She was bent over the stack of books on one corner (which now had two additional volumes) as we drove off J.

We did find a place to wash our hands and have a meal with “the best sweet potato fries ever” according to my navigator.

Getting tired of the sameness Kris suggested we try a few more and head north. There came a big green sign with that word on it. HUGE. And so, laughing we headed toward the woods, We drove past probably 7 or 8 green signs taunting us or comforting us, however you wanted to take it, that we were on the right road, we would soon get there, to keep on going, and we were almost there till finally at the top of a hill about 6 miles into the woods we saw a house halfway into the little valley. The 100 mile rummage sale had begun on Thursday so it’s likely the slim pickings should have been expected. I had a few things left in the car and felt I should leave a couple of Christian books at this one. I did not bring them with me to sneak them in. We walked through their goods and chatted with the friendly gals. I told them I was going to purchase a blue candle but I had something for them in the car. Kris was done shopping and entertaining the ladies with stories of our adventure, so she went to the car when I did and stayed there while I returned with the books.

As I re-approached their table, I explained the husband-dare, and like others they laughed and thought it was a great idea they might try someday. I handed both books to the gal sitting at the checkout table and she moved the top book to look at the second and gasped then held that book to her chest and exclaimed possessively, “This one’s mine!”. I asked her what that was about and she said she was amazed. A friend’s grandmother had highly recommended that she read that specific book, she said, and she had been wondering how a gal out in the middle of nowhere was going to find that book. Her friend came over and commented on the situation and the gal kept looking at the book and at me and shaking her head. Kris and I had exchanged info about where we live and so she knew it was a God-led coincidence for us to show up and hand her the book she was seeking at her friend’s grandma’s urging. It was obvious from the conversation the grandmother was a believer and wanted to share her faith with the younger woman. 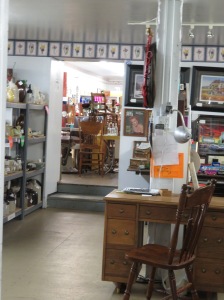 I did not leave my name or info as I sometimes do, but did have in each book a postcard about where we are in the world compared to the sun. They were reading it aloud when I left.  I did rather float out to the car in happiness.  I love when God answers prayers like that.

A friend visiting today  said that a wise person told him that the longer a person walks closely to Christ, the more unexplainable “coincidences” they will experience. He found it true.

I find it true as well.

What was your most recent unexplainable coincidence?

← New Life and A New Name
What Good is Anger? →