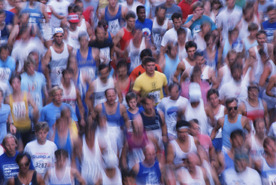 parent’s voice? Would that one voice stand out?

In Spain last summer, Lara (one of the missionaries) was driving a few of us home from an outing. The sun was setting, and she willingly pulled over every time we saw a Kodak moment. On a pullout near a country road, we took one last picture as the sun slipped away. Standing in the soft darkness we heard the soft clank of approaching bells, and a shepherd calling out.  Quickly, Lara turned the car, trying to locate the herd with the car’s headlights.  We snapped pictures wildly for several minutes as at least a hundred sheep approached the road where we’d parked, the bells clanking louder until we saw them, softly lighted at the edge of the headlights glow, then continued up a hill and slipped into the darkness.  None of our pictures turned out but the vision was still unforgettable.  A lone shepherd dressed in loose pants and shirt, leading and talking to his flock. At least a hundred sheep, their bells swinging and clanging, followed their master through the darkness.

I couldn’t stop thinking of the sight and the portions of scripture that talked about the shepherd and the sheep – especially Psalm 23 and John 10:27 “My sheep hear My voice, and I know them, and they follow Me. 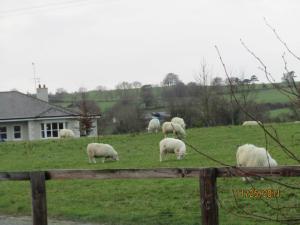 I have a little sheep on a shelf by my desk to remind me to listen for my master’s voice. And to follow – even – no, especially, through the darkness.

My Spain experience was brought to mind and the lesson magnified recently through a story from Oz Hillman in a TGIF devotional.  He says:

The next morning, a shepherd came over to the pen and made a comment to his sheep. One by one, the sheep filed out to follow him. Only his sheep followed his voice. My friend said it was an amazing scene to see only that shepherd’s sheep follow him and the others remain in the pen. What a picture of Jesus’ words spoken centuries earlier.

Hearing and responding to Jesus’ voice is the key to having a two-way relationship with God. It is the difference between having religion and a relationship.

Can you recognize God’s voice in your life?

Are you listening to the Shepherd’s voice?

Do you respond when He calls?

Ask Jesus to help you increase your ability to hear. Give more time to spending quiet moments in His presence to hear His voice. He wants to be your Good Shepherd.

← What’s Your Listening Style?
Silver Boxes and Plagiarism from Hell →