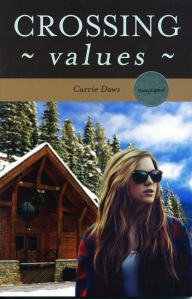 Crossing Values is a Christian romance geared to women and young adults. Carrie Daws’ personal goal, to produce stories she would not be ashamed to have her daughters pick up and read, was certainly met in this debut novel.  For more about Carrie visit – carriedaws.com/ and carriedaws.com/blog/

Amber Griffiths, A bedraggled twenty-something, straggles into the General Store of Crossing, Oregon, looking for a job, and captures the sympathy of a frequent customer, the Christian owner of a logging company.  Frank Yager knows his wife Faye will also recognize a wounded heart and invite Amber to stay with them for the winter.  While the Yager’s family offers a warm welcome, their Pollyanna-like happiness seems almost too good to be true to Amber.

Although Amber has obviously run away from something or someone, the deeply spiritual family is drawn to her, including their single son Peter.

Amber’s secretiveness, tendency to bolt when conversation gets personal, and her anger with God confuse Peter, who has growing feelings for the Yager’s mystery guest.  Add the rich and ego-driven girlfriend Peter was dating, a mysterious investigator, and a startling revelation from Peter’s lawyer friend, and the truth finally unravels.

The Yager family had compelling and fun personalities, and all were more interesting to me than the heroine.  Although a tender story of spiritual discovery, the romance angle is so muted that the proposal almost comes out of nowhere. Peter’s inner dialogue of his growing feelings for Amber began abruptly, and Amber’s character showed little reaction or thought of love.   The fact that they do not kiss is not an issue for me. (I personally know of several couples that determined not to kiss before marriage), but the lack of revealed mutual attraction slowed down the story’s pace, and made the resolution of the romance less satisfying than it could have been.

Other notes:  The cover shows a blond and the heroine is described with dark hair the color of mahogany.   The character featured on the cover never appeared in the story.

The final chapter introduced a brother of Amber’s who was named, but not previously introduced into the story. The questions posed in the afterthought are a good lead into a continuing family saga, but in my opinion, there is insufficient reader knowledge of Ryan’s character to intrigue me to read a story about him. Another reader, however, might have enjoyed the secondary character of the mischievous sister-in-law Brittney, the obvious future heroine, and be intrigued that the next story might be more satisfying.

I received a free copy of this book/Ebook/Product to review. I was not required to write a positive review nor was I compensated in any other way. The opinions I have expressed are my own. I am disclosing this in accordance with the FTC Regulations. I am part of The CWA Review Crew.  #cwareviewcrew