A Basket of Hope

A Basket of Hope is a true family Christmas story that never gets old for me. I post in the hope that other families may get inspired to do similar things.  And Edna, if you are out there, I think of you often, but especially every Christmas.

I’d hidden the car a few blocks away. With finger-over-lips silently motioning, our three kids, ages 4, 6 and 7, climbed out of the station wagon, heading toward a softly-lit small weathered house set back from the highway. I felt like a cat burglar, with family-in-training, skulking along the bushes that separated the street and snow-filled ditch.

I paused to belatedly reassure myself that we hadn’t forgotten anything. Yep — the girls and I each had our assigned bags, and our little guy alternately carried and dragged a brightly painted red empty bushel basket.

Another car whizzed by and our little tow-headed son was amazingly solemn when I gently placed my flattened hand on his hat –our silent signal to scrunch down out of sight from the headlight glare. The girls also quietly ducked until the white light rode over us, the yard, and then finally slid over the snowbank by the road. 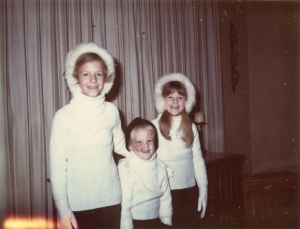 It was their idea after all. Laurie’s memorization of Luke 2: 8-14 for the Christmas play and multiple practices of its story of the babe with no place to lay his head had profoundly affected her and her siblings.

Cheri in particular always wanted to help anyone in need, so one Sunday our eyes met in understanding when she’d climbed into the car without her mittens, then shrugged her shoulders in response to her daddy’s inquiry, pointing to a red-mittened little girl plowing across the snow-covered field with her mom to the same weather-beaten house that now stood before us.

The idea began then, but I love to read a different Christmas story each night of the entire month of December and the reading of The Gift of the Magi where both husband and wife gave their precious possessions to purchase a gift for the other had cemented it. All three insisted they could give up one or more of their gifts for someone who probably would not get anything otherwise, and thus the plan was born. What parent could refuse such a selfless act?

Pajamas, cocoa and gloves for everyone, a doll for the little girl  a truck for her brother, and the makings of a simple Christmas meal were gathered and here we were, whispering and darting from one bush to the other.

Quietly the children circled the trees that flanked the sloping porch, Kevin placing the basket. I added plastic bags of food and raced with him behind the biggest bush at the edge of the yard while the girls quietly topped the basket with the wrapped gifts, knocked hard twice and raced back to join us collectively holding our breath as the door opened.

It was the dad — he stood on crutches, looking around to the left — to the right — then called his wife. She stepped out and also scanned the yard, then bent to pick up the basket. Two little faces appeared stair-stepped in the lighted doorway and excited squeals sounded as eager hands helped to lift and carry the packages in. Then the door closed off their wondering chatter. That was our signal and we ran like the wind, our mitten-clasped hands joining reverently this time for a dash across the field to the waiting, and by now, cold car. There was none of the usual clamoring for front seat, and no murmuring about the car’s chill as we each privately recalled the faces outlined in the doorway’s glow.

That Christmas was especially meaningful; but a few months later

following an announcement at church that the father’s leg had healed, and he’d gotten a new job out of town, our hearts were unexpectedly touched again.

As Cheri and I were about to exit church behind our family, the mom stepped up behind me and slipped a plastic bag into my hand, which I could feel contained a frame. Don’t open it until you get home,” she admonished, “and,” she paused and whispered, “Merry Christmas.” I looked up in shocked dismay, wondering if she’d discovered our secret, but she shyly smiled and touching Cheri’s hair explained, “I’ve been working on this since your little one gave Edna the red mittens last December, so now it still seems kind of Christmassy. Hope you don’t mind, but those mittens were the start of our Christmas hope.”

Touched, I tearfully assured her we’d surely love whatever it was, and after last farewell hugs we rushed to the rest of the waiting family in the car. For once dinner could wait, and the moment we were in the door everyone hovered around the package as I drew out a simple cross-stitched picture of Mary and her contented baby Jesus, their hearts close.

It seemed to remind us that there was the place of Hope — close to the heart of Jesus. That picture still speaks the Christmas message in our home year-round and I wondered too if Cheri was treasuring the memory years later when she told me what she’d named her first little girl — Kristin Hope.

Christmas Blessings as you put hands and feet to your faith and hand out gifts of Hope.

6 Comments on “A Basket of Hope”