Each time one of our children was born, I remember feeling, life could get no happier. I

felt so complete, so one with God, I thought I there could not possibly be more pleasure in life. I thought I was satisfied.

Several times after fasting and praying, I thought I’d reached the point to say Yes, Lord, and even

wrote a song (yet to be set to music) which basically says if “all there was to my life” was knowing the truth of God’s love and sacrifice, I’d be satisfied.

I am inspired to see or hear of people who respond to difficulty and tragedy with that “even though” kind of faith like our David did, saying Yes, Lord what do you want to teach me now, and these familiar faces in the Bible:

Job –  “Though He slay me, I will hope in Him. (Job 13:15) Job could relate our losses because he lost his livelihood the same day all his children died. His health reduced him to a place where no one wanted to be near him lest the disasters touch them too… but Job 1:22 says – Not once through all this did Job sin; not once did he blame God.

David – Psa. 17:15 As for me, I shall behold Thy face in righteousness; I will be satisfied with Thy likeness when I awake. And Psa. 119:57 Because you have satisfied me, GOD, I promise to do everything you say.

Abraham who did not flinch to do whatever God said…

Gen. 22:1-2 Now it came about …, that God tested Abraham, and said to him, “Abraham!” And he said, “Here I am.” And He said, “Take now your son, your only son, whom you love, Isaac, and go to the land of Moriah; and offer him there as a burnt offering on one of the mountains of which I will tell you.”  I can’t even imagine saying Yes, Lord to that one.

Later in Gen. 25 we are told the results of Abraham’s obedience – And Abraham breathed his last and died in a ripe old age, an old man and satisfied with life; (even though)

I am beginning to see what brought about the end result of “satisfied” with these and others I have witnessed – it is that even if once they sought for satisfaction in themselves they had come to the place where they recognized the truth of Luke 6:25 (The Message):

And it’s trouble ahead if you’re satisfied with yourself.

Your self will not satisfy you for long.

And it’s trouble ahead if you think life’s all fun and games.

There’s suffering to be met,

and you’re going to meet it.

What made them – and draws me – to be satisfied is  realizing nothing in myself can bring about eternal satisfaction but knowing He who satisfies. . . 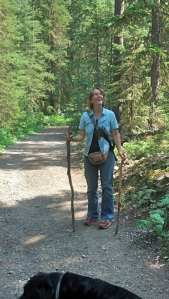 As David said – YOU God, satisfied me and when I awake (after death) I WILL BE SATISFIED with your likeness

And me? That is what I want too- to be able to say, Lord, I’m satisfied. Not with myself…or anything I have done, but with knowing that even though sometimes life seems unbearably dark and painful, even though I have had to walk through the valley of the shadow of death, I am comforted when I recognize His presence through it all.

I fear no evil; for Thou art with me;

Thy rod and Thy staff, they comfort me.

I want to abide in His promise that

And I want to encourage you all who have, or who now are, or who will experience trouble

… even though now for a little while, if necessary, you have been distressed by various trials, that the proof of your faith, being more precious than gold which is perishable, even though tested by fire, may be found to result in praise and glory and honor at the revelation of Jesus Christ; (1Pet. 1:6-7)

And My people shall be satisfied with My goodness,” declares the LORD (Jer.31) 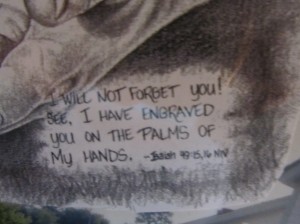 Category: DevotionalTags: david, even though, Job, no matter what, psalm 23, satisfied, trouble

← The Final Page
Two Sides to Every Selfie →

4 Comments on “Satisfied? …Even Though?”