“There is a sacredness in tears. They are not the mark of weakness, but of power. They

Most of my young life, I longed to be a mother, even before I knew what it meant. I just loved babies and the amazing evidence of God’s plan for life. I was young when I discovered my paternal grandmother was Native American and a healer, and about 9 when I met people of other ethnicities, cultures and customs. I was so impressed I told my mother I wanted those traits in myself and my children, concluding, “When I grow up I want to have 12 children – each one a different nationality.”   I remember her smile, her glance moving to Dad and back to me, and her saying, “We’ll see.”

anniversary of that wonderful experience. Yep, it was the days before Lamaze and ultrasounds and a physically painful experience (induced labor, 12 hours of hard contractions, that made my sister, tramping the hospital halls, swear to never have children) but was still one of my three great ‘close to God’ experiences.

Laurie grew up to have a super sense of humor, enjoy French, flute, math and eventually to be our ‘prairie girl.’ When she married and moved to the country in northern Wisconsin she began cooking and gardening with earnestness. She 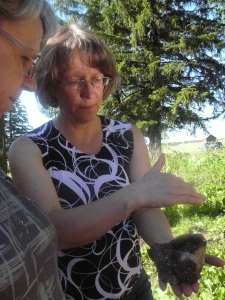 made her own teas and cough drops for her children, who were seldom ill. She told me once of an epidemic going through school, with kids absent day after day 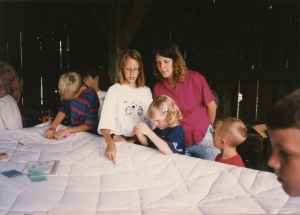 for weeks. The teacher said she had seen many times how Laurie’s kids would not get ill, and it was so ingrained in her that she dreamed one night that the entire school was empty – except for Aimee and Ben.

Open and loving to all people, Laure loved to host and prepare special foods for meals, gatherings, treats for work, and bonfires.

She also became addicted to knitting and made purses, 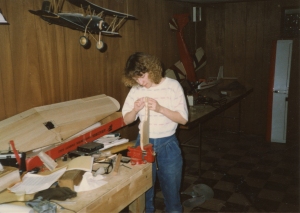 puppets, felted birds, bowls, and decorated sewing kits as well as helping Doug create things and remodel the house.She loved her job and she loved to learn, study, and grow. She was not afraid to get her hands dirty.

She also loved being a Mom and an aunt. chasing David to get the Auntie-kiss he pretended he did not want…then when Michael was a student at Point and got the flu, she brought him soup and meds, and watched out for him, Kristin and others.Encouraging others and helping seemed ingrained.

Her love, acceptance, and giving extended beyond family and anyone who was important to those she cared about was important to her. She expressed her heart in music, and would email me or call me saying, “Mumzie, on the way to work I listened to (Seize the Day, There is a Redeemer, It is Well With My Soul) and it was so encouraging – I’m going to have an amazing day.   She loved jamming with the family.

History of our country and our family was important to her, and some of our most special times were at the Native American festivals, and researching and studying together their herbs, their music, and their faith. I will continue that with her spirit at

We loved to make each other feel special on our birthdays. I often got calls, poetry, and a surprise package when weather or schedules did not permit our meeting in person. The rest of the family often experienced gifts that took time and a labor of love. 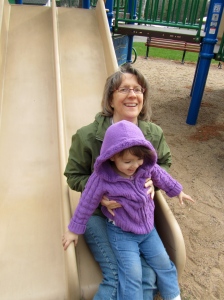 Like most mom’s I could hardly believe it to hear my daughter called Grandma! She

adored that role, and would stop anything to sit down and play with the little ones, and teach them to love to cook and knit. She convinced Ken, her don’t like to travel Daddy, to travel across the country to meet her grandson Henry in Montana.

We joked when she was a young mom what a passionate crusader she could be – imagining a poster of her with a breast pump in one hand and the Bible in the other.   Gardening became more of a passion than “just” providing excellent nutritious meals, as she also made salves, teas, and poultices for family and friends who had found no resolution from traditional remedies. She was confident in her passions, but gracious in her application.

I recall once I had an issue for weeks, had gone through several prescriptions without relief and doctors were considering hospitalization and tests to try to solve the issue. She

called me and said, “Mom I don’t like feeling like I might be between you and your medical advice, but I would feel bad if I didn’t tell you what I know works for that

issue.” She sent us to find fennel tea (which I’d not heard of) and it did indeed soothe and resolve the issue within an hour. After that I began saving money and learning from her to look to our ancestors dry herbs, and make comfrey (which she planted in my yard one Mother’s day)and plantain salve, bee sting remedy, teas and to eat the greens I’d previously cut off and tossed.
Laurie lost her sense of smell as a toddler and when we were in Chicago, she said coworkers told her the original Chicago-style Popcorn company was there. I told her I could smell it, so we followed the scent, and went in, but when she read the ingredients she would not even 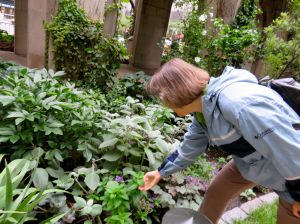 So we went for a walk to find a healthy treat at MORE.  My toast to you today.

Organ donation was important to Laurie and was an extra reason to consistently say no to unhealthy foods – in case she went home to be with the Lord early she declared “my organs will be healthy.”

Some would say her dedication and gift of life to over 70 recipients was her final gift, but other gifts live on too. Reconciliation and determination of unity – whether it be her immediate family, our extended family, her work family, her BSF family, her neighborhood families, all of whom she touched in the circle of her life, was vital.

Bible study together. We had great discussions and prayer and then – off to shopping and finding a good chocolate dessert – preferably decorated with swirls and professionally presented. Doug said to me that if anyone lived like Jesus, it was Laurie.

I think we made a million precious memories, and these are only a few. Laurie, I could go on and on, as you and Cheri and Kevin well know! 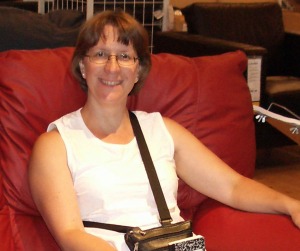 But for now, Happy Birthday C. G. Almott – the secret pen name you created from the meaning of your names Laurel (crowning glory) Lee (healer). So you would sign your poetry C. G. Almott Crowning Glory (at least most of the time).

You lived up to your name, and blessed family, friends and co-workers. We treasure every evidence of your time with us.

← After Losing a Child – Surviving Celebrations
When… →