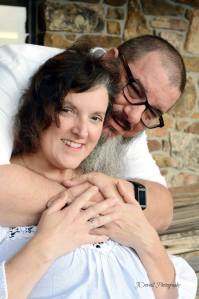 awaited goal – their new home.   When first married the husband’s job transfer took them out of state. Finally settled, they went into the city for her job interview and while there, lightening struck their apartment complex, destroying all their possessions – even their precious kitten.   What could they do but start over? Gradually they rebuilt their lives and expanded their families with a little girl. Work, plus the commute didn’t give the family much time together. Daddy’s subway commute to work ended at the twin towers, so they decided as often as they could to go early as a family and breakfast together at a little spot beneath the tower, then Daddy would go off to work from there, Mom and daughter could pick up any necessities and return home. The night before 9-11 baby was fussy and the exhausted couple overslept. They awoke to the devastating news of the 9-11 attack, and realized that if they’d awakened on time, they would have been beneath the towers. Grieving the great loss with the rest of America, they soon had to grieve Daddy’s job too – like many other companies that needed to rebuild, jobs were eliminated.   What could they do but start over? The importance of family rose through new heights, and when a new job was offered back in the area where they married, they returned to Florida. They gradually rebuilt their lives again and at long last moved to a lovely apartment complex. Here their family expanded by another daughter and a son. The only drawback from this location was that Daddy’s aging parents were in another state

about 14 hours away. Their vacations and job searches focused on getting near Daddy’s parents – especially when his mother had a life-threatening crisis. While on one of their trips to visit his parents, a new challenge was literally spreading over their sweet apartment. Apparently one of the renters in their multiple-apartment complex had bedbugs and improperly sprayed without contacting the manager to properly seal off the area. Instead of being eradicated, the bugs spread to other apartments, and our niece and family came home to a condemned apartment building. Once again everything was destroyed. It was heart rending to lose baby mementos and all property except what they had taken on vacation. It was heartbreaking to discover their insurance considered the loss an ‘act of God’ and would not reimburse anything.   What could they do but start over? While staying with friends, word spread of their need and someone mentioned a trailer that was available, so they loaded the mattresses and other gifts they’d received from friends and family and relocated again. A few months later, they thought there must be a mistake with the $600-$800 electric bills, but a utility company survey said the property and window air conditioner were old and there was not anything that could be done to reduce that expense. Scrimping to cover their debt the little family determined to find a way out, and to get near to Daddy’s parents. Their prayers

were answered with a job transfer a couple hours away from parents, where a lovely home now awaits their arrival. A couple of the people involved in the purchase proceedings were going to sell some furniture to them, but instead called and said, just come, we will have a surprise for you.   Their faith and determination have carried them through some big storms. We are almost there and eager to see their surprise and, this time, a joyful starting over. I have her mom with me. Tomorrow about this time we will get to join them to celebrate their fresh start.   Lam. 3:22-23      The LORD’S lovingkindnesses indeed never cease, For His compassions never fail. They are new every morning; Great is Thy faithfulness.

← Offended? Accepting Offense is a Choice.
Announcing: Be The Miracle! →

6 Comments on “Starting Over”